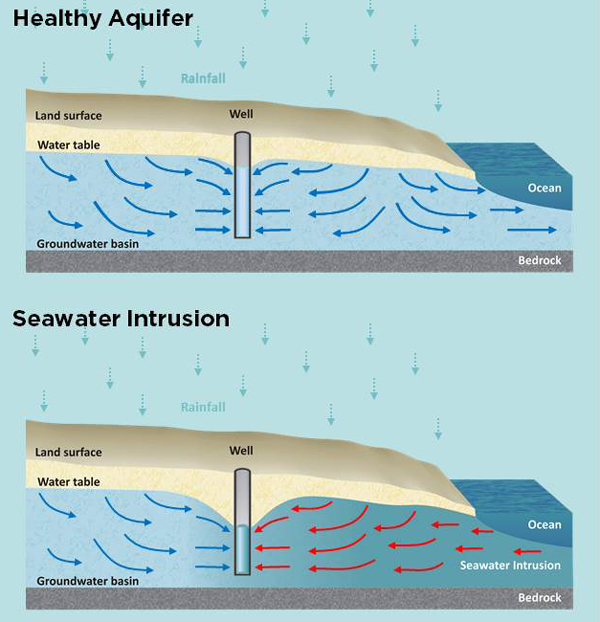 Our groundwater basin is shared and used by municipal agencies and private well pumpers.  Collectively, more water has been pumped out of the ground than has been naturally replenished with rainfall.  This has resulted in a state of overdraft and seawater intrusion along our coastline.  Based on our hydrologists' analysis, there has been over pumping of the Mid-County groundwater basin since the mid 1980s which reached a peak in 2003. Pumping has since subsided to a point where, in 2014, the total pumping in the basin is near the level that hydrologists have established as sustainable. However, there is a thirty-year deficit that still needs to be made up, in addition to maintaining total pumping below a sustainable yield level.

This video offers information about what seawater intrusion is:

Over the years, the local agencies have been taking actions to bring the basin back into balance by promoting water conservation  and reducing groundwater withdrawals, moving pumping away from the coast, working collaboratively with partner agencies and private well owners, and developing a new source of supply.  While we have been successful with several of these actions,  developing a new source of supply has been a very hard challenge in our community. Click here to learn more about the history of groundwater management in the area.